Sister Sledge was one of the most popular disco/R&B groups during 1979. They formed the group in Philadelphia in 1972 while teenagers and recorded a number of moderately-successful songs during the 1970s, including the 1975 proto-disco song "Love Don't You Go Through No Changes On Me" (#92 Pop U.S.) and the 1977 R&B song "Blockbuster Boy" (#61 R&B U.S.). But it was when they got produced by Nile Rodgers and Bernard Edwards that their careers really soared. They are best remembered for their disco anthems "We Are Family" and "He's the Greatest Dancer". They continued recording into the 1980s and 1990s. Their CD "African Eyes" was released in February 1998. Their next release was the "Style" album of July 2003.
DISCOGRAPHY 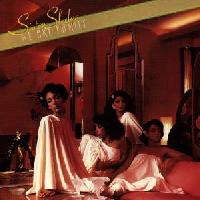 The song "We Are Family" became the theme song for the world-champion Pittsburgh Pirates baseball team in 1979, thanks to player Willie Stargell. "We Are Family" reached #1 R&B and #2 Pop in the United States, while "He's the Greatest Dancer" achieved #1 R&B and #9 Pop in the U.S. In Britain, "He's the Greatest Dancer" reached #6 Pop and "We Are Family" reached #8 Pop. "Thinking of You" was released as a single in the U.K. but not in the U.S. "Lost in Music" was popular again in 1984. In September 2001, 195 singers and musicians recorded a new version of "We Are Family" under the direction of Nile Rodgers, and it was released shortly thereafter to benefit charities. Gwyneth Paltrow danced in an airplane to a comedic variation on "We Are Family" ("We Are Royalty", with different lyrics) in the 2003 film "A View from the Top". Versions of "We Are Family" were used on numerous American television commercials during the early 2000s.

The song "We Are Family" was inducted into the Grammy Hall of Fame in 2008.

"On Sister Sledge's We Are Family, Edwards and Rodgers lightly embellish the same [Chic] sound with funky trimmings. Unlike Chic, who recalls the Fifth Dimension vocally, the four Sledge sisters have real soul power, which adds welcome emotional depth to such posed ennui as 'Lost in Music.' The title track, beautifully sung by Kathy Sledge, is a near-perfect fusion of gospel fire and disco cool..."
- Stephen Holden, Rolling Stone

The sisters' next album was also released by Cotillon (Atlantic Records). The disco song on the album is "Got to Love Somebody". The single "Got to Love Somebody" became a #6 R&B hit and a #64 Pop hit in the U.S. in 1980. In the U.K., "Got to Love Somebody" was released on January 19, 1980 and debuted at #34 Pop. "Got to Love Somebody" was released in the U.S. at the end of 1979. "Reach Your Peak" got to #21 on the American R&B chart. "You Fooled Around" is a beautiful violin-backed mid-tempo song verging on disco. "Pretty Baby" is a good R&B number. Bernard Edwards played bass, Nile Rodgers played guitar, Tony Thompson played the drums, and Raymond Jones and Andy Schwartz played keyboards. The horn section consisted of Domenico ("Meco") Monardo, Bob Milliken, and Eddie Daniels. The violinists were Valerie Heywood, Cheryl Hong, and Karen Milne. The Sledge sisters were joined by the singers Alfa Anderson, Michelle Cobbs, Luci Martin, and Fonzi Thornton. 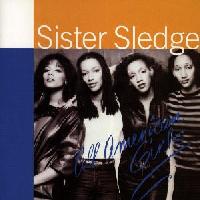 Sister Sledge's 1981 album was produced by Narada Michael Walden and released by Cotillon (Atlantic Records). The disco single "All-American Girls", released in January 1981, did reasonably well on American charts, reaching #6 Disco, #3 R&B, and #79 Pop in early 1981. Meanwhile, in Britain "All-American Girls" reached #41 Pop. "All-American Girls" incorporates both violins and keyboards. The ballad "Next Time You'll Know" reached #28 R&B in the U.S. "If You Really Want Me" is a nice up-tempo song with strings and a funky flavor and "Music Makes Me Feel Good" is another funk-dance number.