Anny Chancel (later known as Sheila) was born on August 16, 1946 in Paris, France. She became a pop/rock star in France in the 1960s, but her early songs have been denounced as childish, vapid, fluffy bubblegum music. Although she sang with B. Devotion (three African-American singers who had previously released an album under the name Trinita) in some earlier disco songs in the late 1970s, her crowning achievement is regarded as her song "Spacer". This late-1979 song, as well as the other 7 songs on her 1980 album "King of the World", were produced by Nile Rodgers and Bernard Edwards of the Chic Organisation. "Spacer" was popular in Europe (including in the United Kingdom, France, Germany, and the Netherlands) and South Africa, selling 5 million copies worldwide, but was not a big success in the United States.

The back of the cover to the original "Spacer" single record (which also included "Don't Go") shows Sheila and the Black Devotion on rollerskates and in concert.

The joyous English-language tune "Love Me Baby" became a sensation when released during the summer of 1977. Since Sheila's first disco album was a departure from her previous style, it was decided to launch "Love Me Baby" anonymously as "S.B. Devotion", without revealing to the public that Sheila was the lead singer. But as the song grew in popularity, the truth was finally discovered. Sheila's cover version of "Singin' in the Rain", which became a British hit in the spring of 1978, is mildly interesting. These songs are pleasant, with melodious strings and good harmonizing, but most would agree that they are not as special as those on the "King of the World" album. The songs were especially popular in France but found fans in many countries. The single "Love Me Baby" reached as high as number 9 in Germany and number 24 in the Netherlands. The single "Singin' in the Rain" reached number 11 in the United Kingdom, number 6 in Germany, number 2 in Sweden, number 10 in Zimbabwe, number 5 in Finland, number 11 in South Africa, and number 7 in Italy.

The "Singin' in the Rain" album was released by Carrere Records in Europe and by Casablanca Records in the United States.

"Steering a course close to dance-orientated rock, the masterminds of Chic have produced a very European-sounding album, as befits French singer Sheila. Sample the Kraftwerk influence on 'Mayday' and the blistering guitar work on 'Cover Girls'; it's Rodgers and Edwards as you've not heard them before. But the album's highspot is unquestionably 'Charge Plates and Credit Cards', a tribute to life with plastics which rocks into a sparse and spacious rhythmic groove which never lets up. Best cuts: Spacer, Charge Plates and Credit Cards, Don't Go."
- Billboard Magazine (June 1980)

"...The album of the metamorphosis [from a teen icon to a disco diva] has the title 'King of the World', in which the ex-'average French petite girl' was accompanied by American black musicians, B. Devotion. The other important presence was that of Nile Rodgers and Bernard Edwards, of the group Chic, which, after signing up artists like Diana Ross and Sister Sledge, had agreed to produce this album. The result, in addition to singing well, is that Sheila gave to her audience her own definition of disco music. A convincing definition, as evidenced by "He's a Spacer, He's a Chaser".
- Philippe Margotin, Amazon.fr

The song "Spacer", released as a single in November 1979, provides over 6 minutes of great drumming and cool grooves, with Sheila and accompanying vocalists singing futuristic lyrics, all combining well to convey a spacelike atmosphere. "Spacer" tells of a woman's love for a gentlemanly "star-chaser" who acts as a protector of the galaxy. He vigorously opposes oppression and is seen as trustworthy. The song says that this man will be leaving on a mission tonight, thereby putting his life at risk. Despite what may happen to him, the love between the singer and this man "will last beyond time and space". "Spacer" reached #18 Pop in the U.K.

The other disco songs on the album are "Don't Go" and "Your Love is Good". The rest of the tracks are best classified as excellent rock music.

As with their previous disco album, "King of the World" was released by Carrere Records. 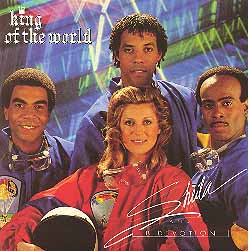 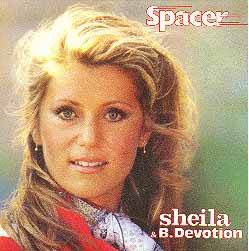