Delegation is a British soul/funk/disco band that has been very popular in Europe but almost unknown in the United States. They have released many singles and albums and have also performed live in concert. Delegation found success in countries like France, Germany, and England.

A Jamaican singer named Ricky Bailey was a co-founder of the band in the 1975. Their first single record, "The Promise of Love", became available in the summer of 1976. The second single, "Where is the Love We Used to Know", became a hit in Britain. The members of the band kept changing over the years, but Bailey was a constant, as was Ken Gold who produced several of their albums. Delegation always had deep roots in the United Kingdom. Its guitarist, Robert Ahwai, and drummer, Graham Jarvis, were both British, and the album "Eau de Vie" was largely recorded at Roundhouse Studios and Sarm Studios, both located in London. In 1979, "Oh Honey" reached #5 on the United States R&B chart. The album "Eau de Vie" was released in 1979 by Ariola Records, one year after the release of their album "The Promise of Love".

Delegation as a group lasted until the early 1990s.

This 10-track album featured the soul classics "You've Been Doing Me Wrong" and "Oh Honey" and the disco tunes "Back Door Love", "Soul Trippin'", "The Promise of Love", and "Where is the Love We Used to Know". 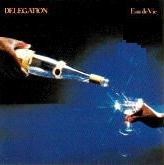 This is an excellent collection of songs with a romantic theme. "Heartache No. 9", "Darlin' (I Think about You)", and "Stand Up (Reach For The Sky)" are great disco dance numbers with great basslines and strings. "Heartache No. 9" is a funny song about eight bad romantic experiences that the lead singer has had in the past, with a warning about the ninth disaster that is about to arrive and will surely do him in. "Darlin'" is a classic love song lasting almost 4 minutes in which the singers exclaim that they want to spend time around their darling girl all the time, and wish to know what she wants. One of the slower songs on the album is "Blue Girl", which is very relaxing. Another soft ballad is "Welcome to My World". The rest of the songs may be classified as general R&B typical of the late 1970s. The songs are upbeat and wonderfully performed. All in all, a high-class effort. "Heartache No. 9" reached #57 on the American Disco chart in the summer of 1980 and reached #66 on the American R&B chart. Best tracks: One More Step to Take, Darlin' (I Think About You), You and I.

"In the Night" is a mellow disco song with Lynton Naiff arranging the strings and Jon Plotel playing the bass. "Dance, Prance, Boogie" is funk-dance. "Singing" is a Caribbean jazz-funk song. "12th House" is a ballad. Also includes "I Wantcha' Back" which the CD producer Big Break Records describes as a "low tempo, funky bass line driven" song.