The Brothers Johnson created excellent funk, disco, and R&B ballads and jams during the late 1970s and early 1980s. Their most memorable song is probably the gold single "Strawberry Letter 23" (reaching #1 R&B and #5 Pop in the USA in 1977). In addition to their own albums, they worked with other artists, and teamed up to contribute handclapping and percussion to Rufus's album "Masterjam". In January 2002, the Brothers Johnson got back together, started touring again, and began working on a new album.

The Brothers Johnson's bassist, Louis Johnson, is regarded as one of the best bassists of the 20th century. His masterwork not only appears on the Brothers Johnson albums but also on Michael Jackson's albums "Off the Wall" and "Thriller" and George Benson's album "Give Me the Night". Louis personally assisted Michael with creating the bassline for his hit song "Billie Jean". And that just scratches the surface of his talent. He played the bass and bass guitar on Michael Jackson's 1991 album "Dangerous", and was the bassist on Earl Klugh's 1976 jazz/pop album "Earl Klugh" plus Earl's 1977 jazz/pop "Living Inside Your Love". He was one of three bassists on Herb Alpert's 1979 album "Rise", which included its top-10, Grammy-winning disco/jazz title-track "Rise". He also played bass on the 1978 Herb Alpert album "Hugh Masakela", the 1981 Patti Austin album "Every Home Should Have One", the 1982 Aretha Franklin album "Jump To It", the 1982 self-titled Donna Summer album, the 1983 James Ingram album "It's Your Night", and the 1985 Aretha Franklin album "Who's Zoomin' Who?". Louis has also worked with artists like Deniece Williams, John Cougar Mellencamp, Grover Washington Jr., Herbie Hancock, Bobby Womack, and the Carpenters. Finally, we should mention that Louis Johnson was the producer and bassist of the 1981 A&M Records album "Passage".

George Johnson has played with Steve Arrington, a drummer and vocalist.

Quincy Jones worked with the Brothers Johnson for many years as their producer and also functioned for them in other capacities. In 1989, George Johnson contributed vocals and guitar and Louis Johnson contributed vocals and bass to Quincy's album "Back on the Block". Louis also played bass on most of the songs on Quincy's album "The Dude", released by A&M Records in 1981, an album which highlights the vocal talents of James Ingram and Patti Austin and the instrumental talents of Quincy's best session players. 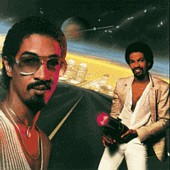 The 1980 album "Light Up the Night" is a fine collection of R&B and disco songs. "Stomp!", a very catchy disco song, reached number one on the American Disco chart in April 1980, and did well on the Pop and R&B charts also, reaching #7 and #1 respectively in May 1980. In the United Kingdom, "Stomp!" was on the music charts for 12 weeks beginning in late-February 1980 and its peak position there was #6 in April. (Incidentally, the U.K. "Stomp!" single has a B-side funk-dance song by the duo called "Let's Swing", but this song did not appear on American releases.) There are radio and extended versions of "Stomp!", with the latter containing an extra horn segment. Other dance songs include "Light Up the Night" and "Celebrations". Michael Jackson participated in the song "This Had to Be". There are also some superb ballads, especially "All About the Heaven" and "Treasure" (the latter reached #73 on the American Billboard Pop chart). This substantial album was produced by the legendary Quincy Jones. 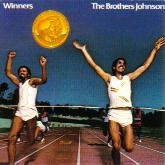 This album was produced by the Brothers Johnson themselves and released in July 1981. The amazing disco song "The Real Thing", released as a single in May 1981, got as high as number 11 on the American R&B chart, but only number 67 on the American Pop chart and number 50 on the British Pop chart. "Dancin' Free" is another dance song that was also released as a single (October 1981) but didn't become a hit. "Caught Up" slows down the tempo a little. "Do It For Love" is a nice uptempo R&B song.